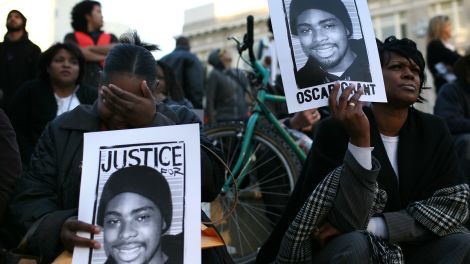 The real Oscar Grant was a young man who loved God, who treasured his family and who wanted to make a difference in the community and in his family’s life.

As a kid, Oscar loved the spotlight. When we had programs at church, he would be one of the first to volunteer to say the scripture out loud or to do the prayer. Eventually, he joined the choir. One time he sang a solo, and he was so loud. It was so funny. Before he joined the choir, I’d be like, “Shh! Be quiet! Don’t sing too loud!” I would cover his mouth. A lady named Barbara, who sat in the pew in front of me, would say, “Leave him alone; let him sing!” And sing, he did. In fact, when he finally got to sing with the choir you could hear him over everybody else. It was amazing.

Oscar had a strong foundation in God, something I don’t think many people realized. When he got older, he would take his daughter, Tatiana, to church and read the Bible with her and his fiance´, Sophina Mesa, Tatiana’s mother. He would pray with them.

His favorite scripture was 1 John 4:7, “Beloved, let us love one another, because love comes from God. Everyone who loves has been born of God and knows God.” I know it by heart because Oscar always used to say it. He was growing and evolving into the man of God that God created him to be. Had he lived, he probably would have preached the gospel of Christ, one day.

When he was younger Oscar always played sports. He loved basketball. He was on a team up until high school and always stood out as a leader. He had a very competitive spirit. If Oscar lost a game, he would try to find out how the other team won and what he could do better next time to win. That’s one of the reasons why The Oscar Grant Foundation started the OG Ballers, a division basketball team of the AAU (Amateur Athletic Union).

And Oscar loved bringing people together. He went to a private school through eighth grade and enjoyed spending time with his classmates. They would play basketball, baseball and video games. Even as a little kid, Oscar valued his relationships.

When I think about Oscar, all I can do is smile. People look at what happened to him, but many didn’t know what his heart was like.

I remember when my father had a stroke. Oscar was so helpful to my mother. He did whatever she needed. If she needed something painted, if she needed baseboards washed, he would do it. Family was important to him. He loved his daughter and spending time with her. His cousins were like his brothers and sisters. They all looked up to him. They respected him as a leader. Even though he wasn’t the oldest cousin, they still valued his opinion, his help. And even though Oscar was younger than his sister, Chante, he always acted like her older brother and was her protector. They supported each other. They took care of each other and I’m so grateful about that.

I want people to remember that man looks at the outer person, but I’m so grateful that God looks at the heart.

We see and hear different things concerning Oscar — and that not only goes for Oscar, but for all of us, right? What people think they see may not be reality. I want people to remember that Oscar had a heart. I want them to know that he loved people and wanted to see people come together in love, fellowship and unity.

— By Wanda Johnson (as told to Niema Jordan)