Mission to Mars Has Meaning 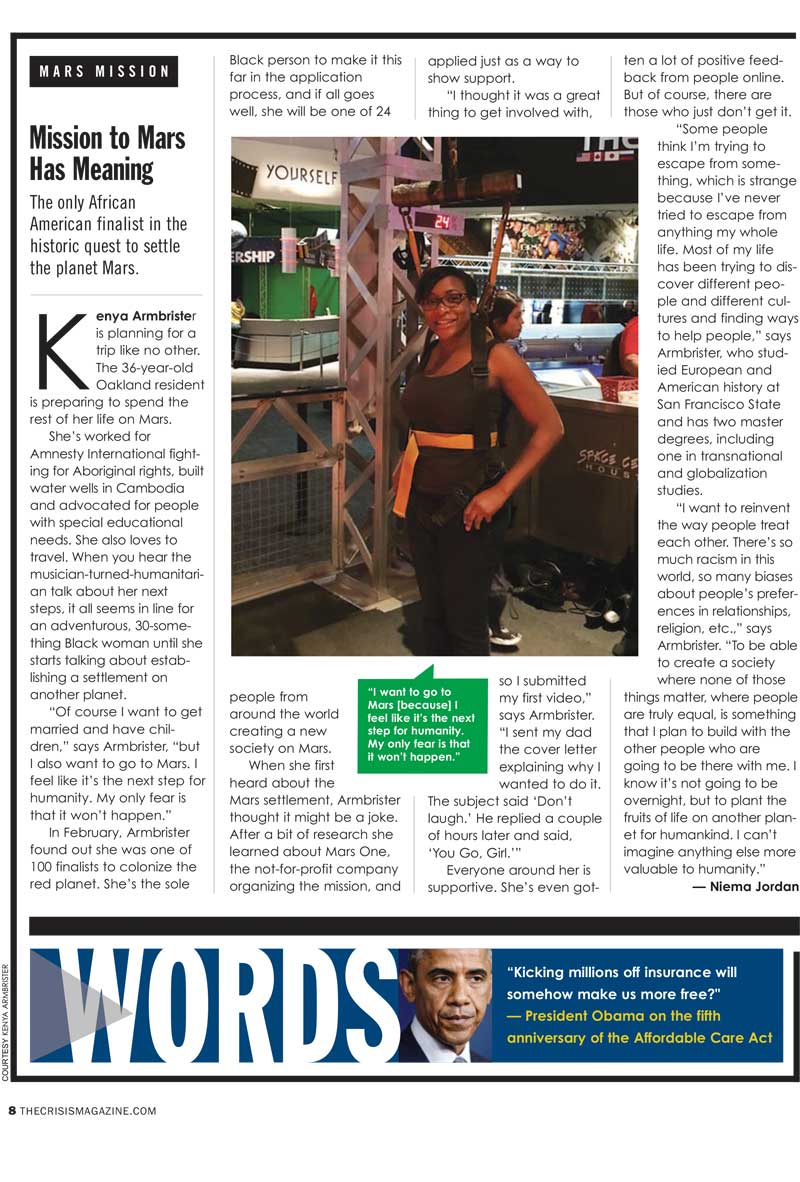 Kenya Armbrister is planning for a trip like no other. The 36-year-old Oakland resident is preparing to spend the rest of her life on Mars.

She’s worked for Amnesty International fighting for Aboriginal rights, built water wells in Cambodia and advocated for people with special educational needs. She also loves to travel. When you hear the musician-turned-humanitarian talk about her next steps, it all seems in line for an adventurous, 30-some-thing Black woman until she starts talking about establishing a settlement on another planet. “Of course, I want to get married and have children,” says Armbrister, “but I also want to go to Mars. I feel like it’s the next step for humanity. My only fear is that it won’t happen.”

In February, Armbrister found out she was one of 100 finalists to colonize the red planet. She’s the sole Black person to make it this far in the application process, and if all goes well, she will be one of 24 people from around the world creating a new society on Mars. When she first heard about the Mars settlement, Armbrister thought it might be a joke. After a bit of research, she learned about Mars One, the not-for-profit company organizing the mission, and applied just as a way to show support. “I thought it was a great thing to get involved with, so I submitted my first video,” says Armbrister. “I sent my dad the cover letter explaining why I wanted to do it. The subject said ‘Don’t laugh.’ He replied a couple of hours later and said, ‘You Go, Girl.’”

Everyone around her is supportive. She’s even gotten a lot of positive feedback from people online. But of course, there are those who just don’t get it. “Some people think I’m trying to escape from some-thing, which is strange because I’ve never tried to escape from anything my whole life. Most of my life has been trying to discover different people and different cultures and finding ways to help people,” says Armbrister, who studied European and American history at San Francisco State and has two master degrees, including one in transnational and globalization studies. “I want to reinvent the way people treat each other. There’s so much racism in this world, so many biases about people’s preferences in relationships, religion, etc.,” says Armbrister.

“To be able to create a society where none of those things matter, where people are truly equal, is something that I plan to build with the other people who are going to be there with me. I know it’s not going to be overnight, but to plant the fruits of life on another planet for humankind. I can’t imagine anything else more valuable to humanity.”