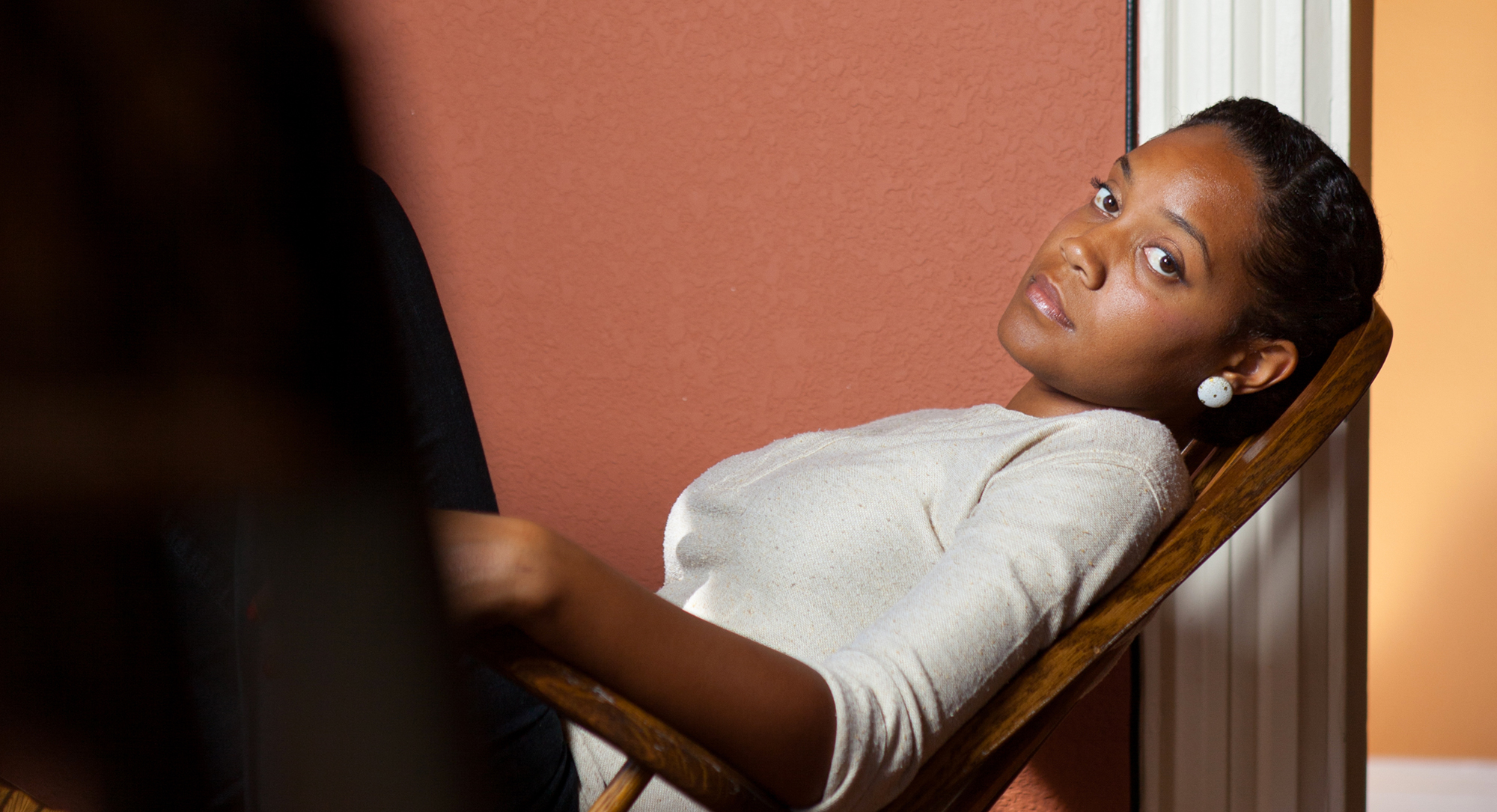 Different people know Chinaka Hodge for different reasons. There are the Def Poetry fans that remember the first time the Oakland native was welcomed to the mic and those that have followed her since her time as a teen with groundbreaking literary organization, Youth Speaks. She’s a playwright and emcee, and she’s also interviewed the likes of Gloria Steinem on stage. Jeff Chang, Daveed Diggs and Dave Eggers all sing her praises.

These days her focus is her book of poetry, Dated Emcees, which dropped this summer. Performing selections from it live with her younger brother Chukwudi Hodge on the drums and beat machine, Chinaka spits hiakus for Biggie and couplets for Pac, offering stories of love, loss, and becoming. She tells the story of the women present in hip-hop, but not often centered. She even dedicated the book to Kendrick Lamar’s fictitious love interest/adversary, Sherane.

Since you mention both of them in the first line of the poem “Title track,” what’s the difference between a jazzman and an emcee?

I don’t think very much. One of my fondest memories of my grandmother is when she took me to a jazz club in Downtown Chicago. I was about 19. She told me about being in New York City in the ’30s and ’40s. The more she talked through it, the more it sounded exactly like all the emcees I’d ever been around. So that’s just kind of a nod to grandma and a sort of contextualization for a reader who might not know hip-hop, but understands jazz very well. They’re kind of one and the same: the trope of traveling, the same trope of carrying trouble with them as a badge of authenticity, the same misunderstanding by the general media about what the art form is and what it’s supposed to do.

I’ve heard the book’s title referred to as a double entendre. Can you explain the meaning of Dated Emcees?

I feel like this is true for pretty much any Black girl out of West Oakland: Every dude she dated, accountant or not, was an emcee, or was a closet emcee. I’ve dated all kinds, from folks who have never shared a rhyme out in the world, to people who have been Grammy-nominated. The other side is: hip-hop is old as fuck, bruh. We’re closing in on 40 years, or 45 years depending on how you’re counting. We got grandpas out here. We got people who should be collecting a pension. But I’m also an emcee, so I’m also one who is dated. And I started writing this book when I was 30 and single, and I was like, “Oh shit, I’m dating myself.”

What was the difference between writing this book and your previous works?

I had way more fun with the text. I was coming out of the run for Chasing Mehserle, which chronicles the fictional life of Watts, who is a young man who grows up in Oakland and sees the Rodney King beating on TV and is like, “Fuck that. If that’s what life is like for Black people, I’m never going out into the world.” Then he makes a New Year’s resolution go into Oakland on the same day that Oscar Grant is killed. It’s just a really heavy piece and I was like, “Shit, the next thing I write needs to be all roses and butterflies, or it’s got to be some level of geeky joy for me because I’m going to lose my mind dealing with so much death all of the time.”

And that’s not to say that there aren’t heavy subjects in Dated Emcees, because there certainly are, but I had the most fun writing this out of anything I’ve even written. Also I’ve got to shout out my Cave Canem family. Having the best Black poets in the country all at the same table really changed the way I approached the poems and really changed what I thought a volume could or should be.

After having done a few readings from the book, what is your favorite piece to perform?

I always love doing “Lose Yourself.” I’ve done that more than anything else. It’s the poem about Eminem and my mom. People love the novelty of that poem. I feel like that’s a great equalizing poem. And then the set I do with my brother just changes everything. I like the Biggie Smalls beat. Typically, a measure in hip-hop has eight, four, or 16 beats, and he made 17 beat measures. Just on some Black nerd shit, it’s one of my favorite things to feel and to be a part of just the mathematics of it.

How did you select the poems for the book?

The poems aren’t necessarily in biographical order, but they are in order of what an imagined protagonist woman would go through, from being hollered at by hip-hop, to marrying hip-hop.

Have the emcees in the book read the pieces?

The poems that are about actual emcees. I’ll posit again that I’m an emcee and they are all actually about me, but the men in the book have read the book. It was a tricky process because these are my exes, it’s not like I talk to them everyday. For some of them, we’ve maintained relationships, and they’ve gotten to tell our story in music very publicly. There was always an understanding of balance that either of us as artists could tell our stories in ways that felt honest to us. When one in particular wrote a song about me, I got to watch the whole process of the song coming into being. It wasn’t necessarily my truth, but it was his truth. It was a really tough process unearthing old things and talking to the past. I feel like this book was a rite of passage for me in every single way.

What do you mean by a rite of passage?

Allowing myself to feel my anger and allowing myself to put psychic distance between the past and the present, all are signs of womanhood. When I started dating these emcees, I definitely wasn’t a woman. When I started writing these poems, I wasn’t comfortable calling myself a woman. I was still in my twenties when I started writing this. I had a 30th birthday, I’m in a really serious relationship with a really beautiful man, and these poems are not without their difficulty in the present as well. In some ways I was expecting a hard road or expecting some challenges, and there were so many more that I never anticipated.

A rite of passage is you signing up for a ritual, or you signing up for a challenge and not necessarily knowing what it is and being pushed all the way to your limit. If you survive to the other side, you are in the next phase or your life. So that’s really how I feel about this book. It’s really short, it’s like 60 pages, and for me it just carries a lot of weight. I feel like it’s my first album. This is my third book, but I feel like this is my first album. And that is also a rite of passage for me.

What’s next for you?

I’m working on a television show called Minors with two really talented directors, Destin Cretton and Ryan Coogler. We don’t know where it’s going to live yet. It’s been a really great process working with Coog and Des so far; they just are two conscientious men of color who want to tell stories for the right reasons. So, I’m really excited about that. And I’m working on a new play, which will be the third in the series to Mirrors in Every Corner and Chasing Mehserle. It’s called Ninth and Row and it’s two brothers’ stories. One of those brothers is a trans person. It’s funny because I started telling that story in 2008, well before the frenzy around trans rights and very high profile white trans people, but this story has always been about a trans person of color who is moving F to M. I feel like it’s a story that hasn’t been told very often and is a big challenge to me because I don’t identify in that way, but the story came to me in 2008 and won’t let me sleep.

What else, uh, I don’t know…big ballin’ with my homies.