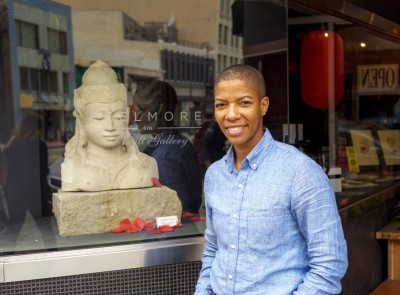 Colorful vibrators with USB chargers, Paulo Coelho’s The Alchemist, old-school records, and vintage issues of Playboy are just a few of the items you can find at Feelmore, a sex-positive erotic shop based in Oakland, California that’s owned and operated by Nenna Joiner. But if you’re not careful, you might miss it. There’s no lingerie in the window, no oversized photos of kinky couples to keep passers by from looking in. But that’s all intentional. Joiner teamed up with a top local designer to create a space that vibes like jazz. “If you think about Jazz, you don’t know if it’s going to be a consistent beat or an intentional scat with the trumpet,” say Joiner. “We include the products but I also include these different types of scats…that really take you on this journey.” If you find yourself inside, you can catch  Joiner coaching a customer through their first purchase or doing an impromptu live stream about being an entrepreneur. She’s hands-on about her business, every step of the way. We spoke with Joiner about her decision to open a sex shop, diversity in the adult entertainment industry and creating a welcoming space.

How did you decide to open a sex shop?

My aunt Robin, who did a lot of work with San Francisco AIDS Foundation, taught me early in my life about my body as a young Black woman. She actually gave me a Good Vibrations book and I went to the store and I was like eh, this ain’t me. I stayed there for a minute and I said this is what I want to do. Instead of criticizing, I always talk about creating and that’s what I wanted to do.

Can you tell us a bit about your clientele?

We have everything from the “gentrifier” to the hippy to the older person who brings their own sacks to put their things in, to the church lady to the church men. We actually have a pretty diverse clientele. I’m really appreciative of that because I really want to make sure I’m here because it’s important for African-Americans to know that there’s someone who understands their community. We have people come here because they have heard that we are Black-owned and they’ve heard that I do work in the community, that I’m in this community, that’s important.

What questions do you ask first-time customers?

It’s a gathering place of spirits and hearts. It’s a place that people can also be themselves and not be objectified and be accepted right where they are. Doesn’t sound too retail-y, but that’s what makes Feelmore Feelmore.

How have you made sure that your space is something different that what people are really used to?

I think one of my true heroes behind God is Hugh Hefner, honestly. One of the things that he really did was embrace diversity. There were ways that he could strategically embrace diversity while making the millions that he made. He included people of color in the magazines like Darine Stern who was on the cover in 1973, October and Jennifer Jackson [who was Playmate of the Month]. I wanted to make sure that in a white homogenous industry that we could actually have people of color included.