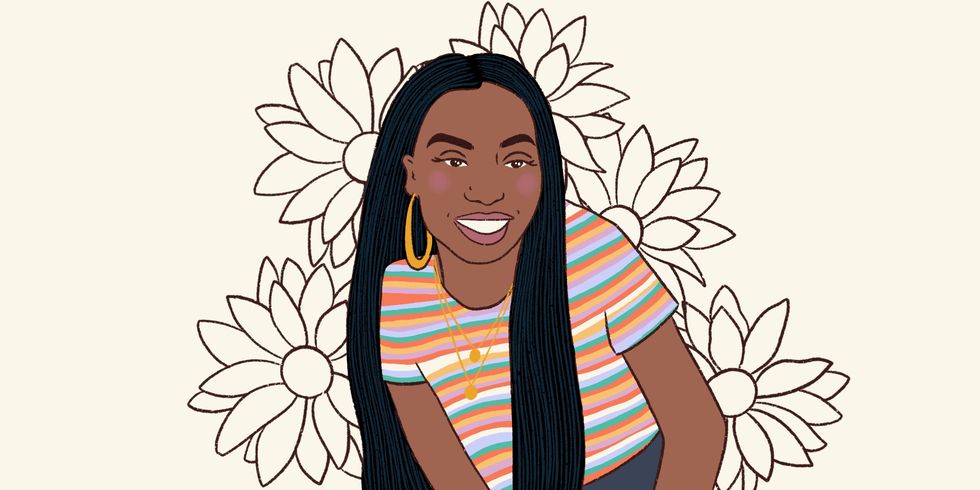 “A year went by so fast,” Ansar El Muhammad says, pausing to reflect on the anniversary of his daughter’s murder. While his tone was steady, I could hear the heaviness of grief in his voice.

“Things tend to get pushed back in the shadows and forgotten real easily, you know? Because there’s so many other things out there for us; distractions, sports stuff, so forth,” he adds.

I sat on the other end of the line thinking about all the things that have been talked about over the past year — political spats, the Warriors leaving Oakland, our city’s current struggle with homelessness — there’s always something new to capture our attention. I also thought about the names of people who have also become hashtags, trending for weeks only to disappear and resurface on their birthday or to mark the anniversary of their death.

“The public tends to forget very easily,” says Muhammad. “One of the things I would love to do is just keep my daughter’s name out there so people will never forget.”

Last July, Nia and her sisters Letifah and Tashiya Wilson were preparing to get off a Bay Area Rapid Transit (BART) train in Oakland when police say John Lee Cowell stabbed Nia and Letifah and fled the premises. At the time, the incident was described as a vicious, prison-style attack and officials said it was one of the most brutal things they’d ever seen. Once news of the horrific incident spread, sadness, anger, mourning, and fear were palpable, especially for black women like me in the Bay Area. Nia Wilson could have been any of us and we felt it.

I wish I’d learned about the 18-year-old thanks to some sort mentorship program in the city. Or that her career took off and I could walk around claiming her in the way that we Oakland girls claim Zendaya, Kehlani, and Kamiyah, like they are our little sisters who became hometown heroes. We are proud and a bit over protective.

But, I only learned about Nia’s musical aspirations after an article in The New York Times linked to her YouTube page. And that only happened because she was killed. The year that would have marked her graduation from high school is now etched in my mind as the year she was violently taken from the earth far too soon.

For weeks after Nia’s death, the entrance to the MacArthur BART station became an altar to the life of a young woman tragically cut short. Hand-drawn posters sat next to fresh flowers and glass prayer candles that seemed to burn forever. Local and national publications wrote about her life and tried to make sense of her death. Celebrities like Anne Hathaway and Viola Davis took to social media, posting photos of the 18-year-old with the hashtag Say Her Name. People gathered outside the MacArthur BART station grieving, demanding justice, and navigating their own sense of vulnerability. Those remembrances and calls for justice were a bright spot for Nia’s family, who is still deep in mourning over her untimely death.

“That’s the only thing that kept me sane, you know, was seeing all the love and support from everyone out there,” her father tells Shondaland. But, eventually, the altars were removed. And while local news kept up with Cowell’s court appearances, it felt like Nia’s name disappeared from the national narrative.

For the last year, Nia’s father, her mother, Alicia Grayson, her siblings (she was the youngest of six), and extended family have mourned her loss while navigating the court system, and trying to get justice.

After a brief manhunt, Cowell was arrested and charged with murder and attempted murder. But, in Dec. 2018, the criminal trial was suspended. Cowell’s lawyer cited 22 times he had been involuntarily committed to a mental hospital before the violent incident. His competency hearing was initially scheduled to happen in February, but his psychiatric review did not take place until May 30. The judge granted Cowell immunity during the hearing, so anything he said during the evaluation couldn’t be used in the criminal case. Just before the first anniversary of Nia’s death, a judge deemed Cowell fit to stand trial. A new date for the criminal trial will be set after he enters a plea on Aug. 2. This ruling feels like there might actually be some justice in this case, but only time will tell.

“The process is pretty tiresome for me and my family, you know what I’m saying? This is something new to all of us,” Muhammad says. “And it’s a lot of time and patience and it’s sometimes been frustrating but we know we have to buckle down and be patient.”

In the midst of the criminal proceedings, Nia’s family has filed a wrongful death lawsuit against BART. As part of the lawsuit, the family is asking that the agency provide more security — particularly since violence on the BART has doubled in recent years — and they want authorities to keep track of fare evaders, like Cowell. The family is also asking that BART create the Nia Wilson Crime Statistics Notice, which would provide regular updates about crime and safety issues happening at BART stations around the city. In addition to their lawsuit, her family has also launched the Nia Wilson Foundation.

While the news coverage may have died down over the past year, thoughts of Nia come to me in flashes. I think of her when I’m riding BART at night alone, or when someone on the bus seems a little unstable. Since Nia was killed, I watch my back in a different way. I pay attention to my surroundings more and keep the volume a lot lower in my headphones so that I’m always aware. It could have been me and my sisters on the train that day, brutally cut down by a man we did not know.

Though I think about Nia when I’m crisscrossing the city, it’s not the same as keeping her memory alive — that’s what her loved ones have tried to do since she was killed. In the last year, Nia’s family and friends have not been able to simply move on and resume their normal lives. They’ve been forced to adapt to a new reality, one where remembering her life and mourning her death doesn’t just happen once a year.

As posts flood my timeline honoring others who’ve also been ripped away — Philando Castille (July 6, 2016), Sandra Bland (July 13, 2015), Eric Garner (July 17, 2017) — I’m thinking more and more about what we do between these anniversaries to honor the memories of those who have been lost.

As the trial and lawsuit slowly move along, as news cycles rage, and as fresh injustices arise, there’s one thing I know for certain: Nia Wilson deserved better. And it’s up to all of us to make sure her memory is not forgotten, and her death wasn’t in vain.